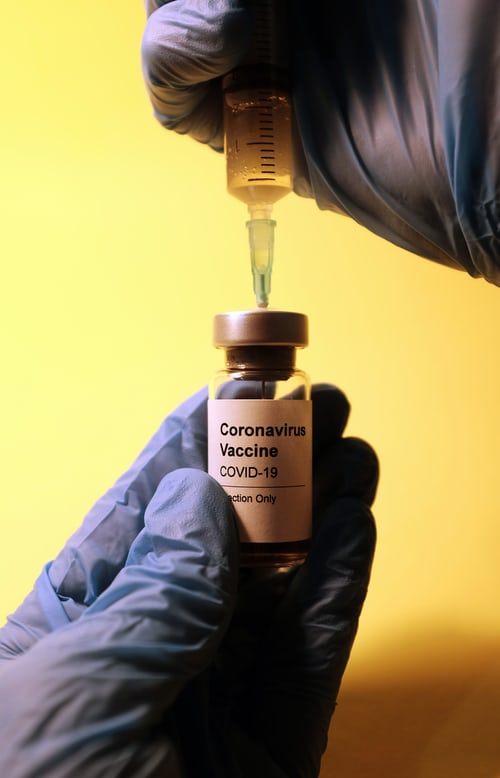 The race for the limited Covid19 vaccines has led to shifts in the geopolitics at play in the Western Balkans. Despite the impressions that China and Russia have the upper hand, however, the European Union (EU) has not been absent from the region. Given the difficulties to meet vaccine needs in its member states, the EU has concentrated on long-term consequences of the Covid19 pandemic in the Western Balkans. Meanwhile, Covid19 cases and deaths are increasing in the region, pointing to the need for more attention on short-term challenges. The handling of the pandemic in the Western Balkans has also reaffirmed long-standing shortcomings in the EU foreign policy. Given that the vaccination is on track in EU member states, the time has come for the EU to prioritise the delivery of Covid19 vaccines to the Western Balkans.

The ongoing coronavirus pandemic and in particular the production and distribution of the Covid19 vaccine has exposed more clearly the gravity shifts in the global power game. First, the shift towards China, which poses the main geopolitical challenge to multilateral institutions, including the EU, its Member States but also to its immediate neighbourhood—the Western Balkans. Second, Russia, for which the Covid19 pandemic has offered a new path through which to endeavour to re-establish itself as a global power. Even the choice of the name of its vaccine (Sputnik) is a statement of intentions that reveals its ‘vaccine patriotism’. For their part, the United States have not shared the Covid19 vaccine with third states claiming – rather unconvincingly in the eyes of many in these states – that this situation is due to contractual limitations set by US pharmaceutical firms. The EU and its Member States are struggling to meet their own needs on vaccines let alone be able to make a substantial contribution outside the EU frontiers. Hence the EU is perceived as having lost relative geopolitical weight during this crisis. But this is only part of the story.

“…the EU is perceived as having lost relative geopolitical weight during this crisis. But this is only part of the story.”

In reality, the Covid-19 crisis has only accelerated geopolitical dynamics that were already in place before the pandemic. In the countries of the Western Balkans, in particular, China and Russia have been present in the past decade through major energy projects and investments and loans in infrastructure and connectivity projects, particularly in transport. Serbia is the country in the region that has been the main terrain on which the geopolitical game regarding the distribution of the Covid19 vaccine has been played. It is the only country in the region that, in summer 2020, signed purchasing contracts directly with the producers of vaccines in the EU, the United States and the UK, but also Russia, China and India. The Chinese impact stands out, as two thirds of Serbs have been vaccinated with the China-produced Sinopharm, as has President Aleksandar Vucic himself.[1] What started out as China’s ‘mask diplomacy’ turned into ‘vaccine diplomacy’, with Serbia being the first European country to receive Sinopharm and set to become a producer of the vaccine later this year. Serbia plans to host two new vaccine plants, making it fully independent from imports.[2] In addition, Serbia has signed an agreement for the production of the Sputnik V vaccine in Serbia as of May 2021.[3]

“…the Covid-19 crisis has only accelerated geopolitical dynamics that were already in place before the pandemic. In the countries of the Western Balkans, in particular, China and Russia have been present in the past decade through major projects, investments and loans.”

Buying the Chinese and Russian vaccines was a risk that has paid off. It has given Serbia the opportunity to portray itself as a champion in the fight against Covid19. But while in terms of vaccines ordered and bought (15 million to be precise) the Serbian government has done well, it has had a hard time convincing people to get vaccinated. On 4 April 2021, about 2.6 million vaccines had been administered in Serbia, with one million Serbians having received both doses (for a population estimated at 8.7 million). Ultimately, only 20 percent of citizens have applied to get the vaccine. This may not be surprising for a society that is regularly exposed to fake news, conspiracy theories, and where anti-vaxxers have been gaining ground while trust in the institutions is declining.

Nevertheless, one should at least acknowledge that the vaccines that Serbia has acquired have also been made available for free to foreigners – about 30,000 foreigners, mostly from neighbouring countries, have been vaccinated – and to asylum seekers in refugee camps.[4] Moreover, Serbia has donated vaccines to Bosnia-Herzegovina, including 4,000 health workers, on top of a recent donation of 10,000 vaccines to hard-hit Sarajevo. In addition, Republika Srpska has managed to directly purchase and receive 42,000 doses of Sputnik V.[5] Turkey too has entered the geopolitical game in the Western Balkans and has sent vaccines 30,000 doses of the Chinese vaccine Sinovac to Bosnia-Herzegovina.[6] Serbia recently decided to support North Macedonia with 40,000 doses of Sputnik V vaccine.[7]

Kosovo, for its part, has refused to inoculate its citizens – including health personnel, teachers and vulnerable groups – with the Chinese and the Russian vaccines since they have not yet been approved by European Medicine Agency. In that way, Kurti’s government has managed to kill two birds with one stone: first, it has differentiated its own approach from that of Serbia and, second, it has also demonstrated its support for the European approach. In that light, Kosovo’s health minister has turned down Albania’s proposal to help Kosovo vaccinate teachers with the Chinese Sinovac vaccine. Meanwhile, Albania is about to reach the vaccination of 200,000 people, helped by a large supply of the Sinovac vaccine.[8] Considering that the Pfizer and Astra-Zeneca vaccines are still scarce, it would have been unlikely to begin mass vaccination in the Western Balkans by using only those.

“The race against Covid19 is not over for the Western Balkans either, where Covid19 cases and deaths are rising.”

The race against Covid19 is not over for the Western Balkans either, where Covid19 cases and deaths are rising. According to European Centre for Disease Prevention and Control data that monitors 14-day periods of Covid19 cases and deaths across Europe, up until 8 April 2021, Montenegro and Serbia were among the top five countries in Europe with the biggest number of new Covid19 cases. Equally, the data show that Bosnia-Herzegovina, Montenegro and North Macedonia are among the 10 worst countries in terms of number of Covid19 deaths. 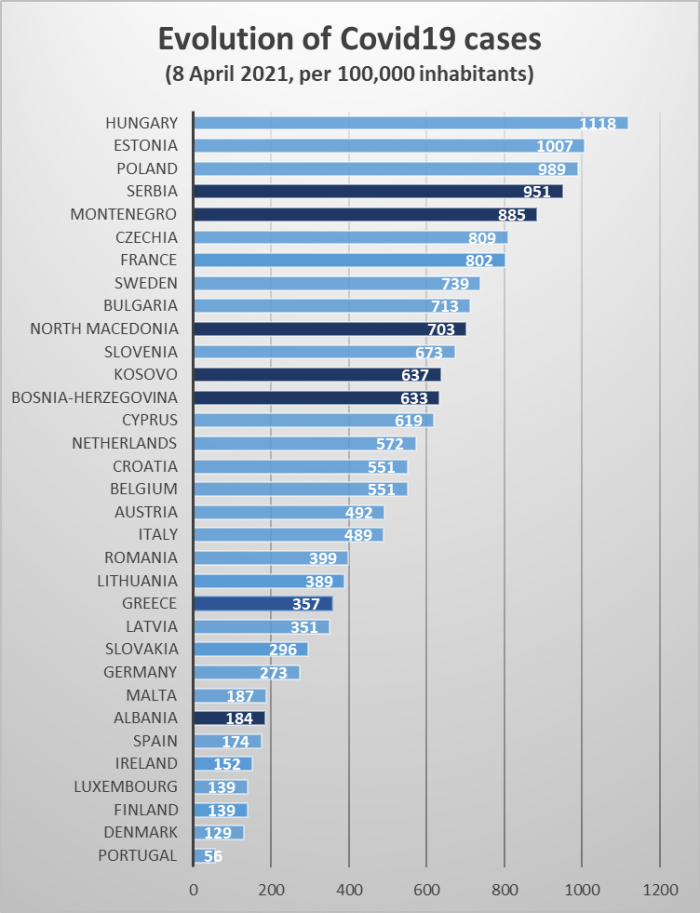 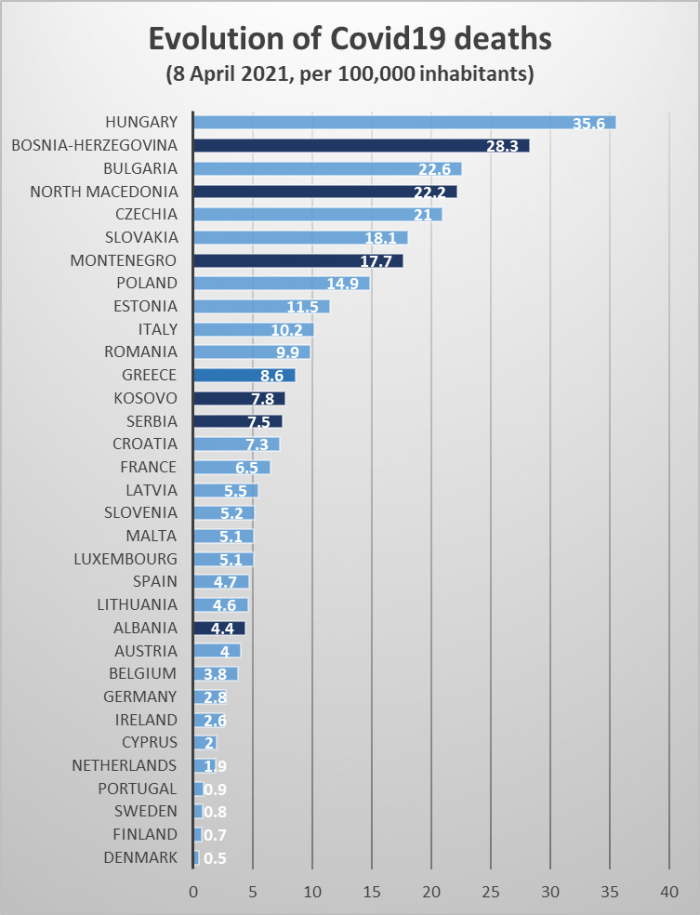 “It would be wrong and misleading to claim that the European Union has been and is absent from the Western Balkans during these trying times. The EU has already mobilised funds amounting to €38 million for immediate support to the health sector in the Western Balkans and €70 million have been offered for the procurement of EU-approved vaccines.”

It would be wrong and misleading to claim that the European Union has been and is absent from the Western Balkans during these trying times. The EU has already mobilised funds amounting to €38 million for immediate support to the health sector in the Western Balkans and €70 million have been offered for the procurement of EU-approved vaccines. In this context, the EU has supported Montenegro’s and North Macedonia’s response to Covid19 with the delivery of more than 1.2 million medical items (ventilators, protective masks etc.) from the rescEU stockpile, hosted among other countries by Greece.[9] This is a common European reserve of emergency medical equipment at the disposal EU countries to tackle the Covid19 pandemic and is financed at 90% by the European Commission.

The Western Balkans had secured contracts for 5.2 million doses of vaccines via the COVAX mechanism in late October 2020.[10] These vaccine deliveries are finally underway in the Western Balkans. Nevertheless, these delays have pushed Bosnia-Herzegovina, Montenegro and North Macedonia to follow in Serbia’s footsteps and place orders to get the Sinopharm and Sputnik V vaccines. Moreover, it was only in late January 2021 that the European Commission’s President finally publically committed to making available the EU’s surplus of vaccines to the Western Balkans.

Given its own difficulties until recently with the vaccine rollout, the EU has supported the Western Balkan countries on addressing the long-term effects of the Covid19 pandemic. To do so, it has offered more aid than any other donor. Specifically, it has allocated €467 million for supporting the national health systems to mitigate the pandemic’s socioeconomic impact, €750 million for macro-financial assistance, €455 million for the economic recovery of small and medium and innovative enterprises, and a European Investment Bank credit line of €1.7 billion for public investments and private businesses.[11]

“The geopolitics of Covid19 vaccines has exposed some of the perennial weaknesses in EU foreign policy. […] Now is the time for the EU to show it can be geopolitically relevant – and also do the right thing in a region where it is already heavily engaged through the enlargement process.”

As with every race, however, timing is everything. The geopolitics of Covid19 vaccines has exposed some of the perennial weaknesses in EU foreign policy. First, it has pointed out yet again the need to be faster and better at reacting. Reacting in a timely manner would allow the EU to bridge the emergency gaps at a given moment (first masks and then vaccines) – a gap that primarily China but also Russia were quick to fill during this crisis. Second, it has shown how crucial it is for the EU to better and more forcefully communicate what it does, especially when recipient governments do not do the job. China, in particular, appears ready to provide the vaccines countries cannot buy on the international market and which multilateral mechanisms are slow to provide. The Western Balkans countries still need between 20 and 30 million doses of vaccines if they are to vaccinate 60 to 90 percent of their population.[12] Now is the time for the EU to show it can be geopolitically relevant – and also do the right thing in a region where it is already heavily engaged through the enlargement process. With the vaccination inside the EU finally well in place, the EU must make delivering the needed vaccines to the Western Balkans countries a priority.

[11] European Commission, Factsheet on EU response to the coronavirus pandemic in the Western Balkans, February 2021.