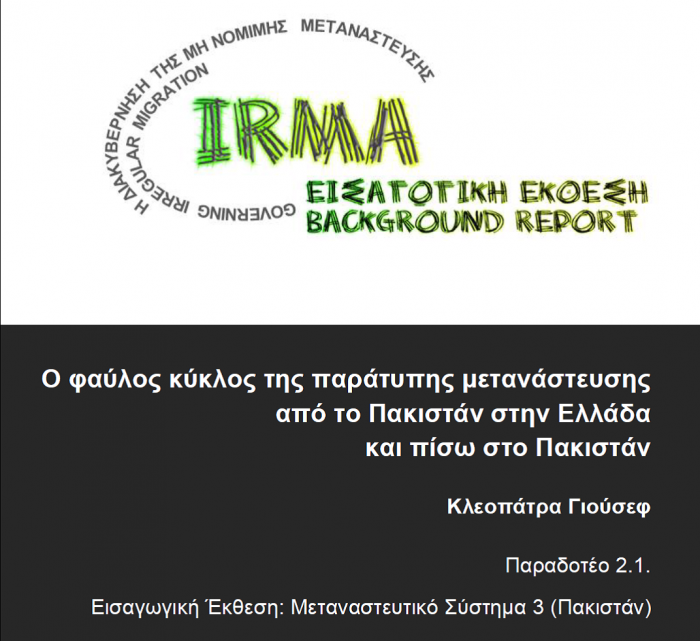 Migration in Pakistan is intertwined with the country’s history and development. The internal and external mobility of people, which is based on a migratory culture that is both private and collective, has contributed to substantially altering the cultural constitution of the worldwide Pakistani population. Currently, four million Pakistanis who live and work outside the country, half of which in Europe and the United Kingdom in particular, constitute the largest community of the Pakistani diaspora. To put in somewhat general terms, Pakistan constitutes a paradigmatic case of a model of contemporary migration, which shows two distinct phases, one legal (at first) the other illegal (at a later stage), as a result of the varying conditions concerning migration in the Middle East and in Europe.

Among the European countries, Greece presents a case of particular scientific interest as it serves today as a junction of irregular migration from Pakistan to Europe. The current research paper is focused on the Greek case of Pakistani mobility and attempts to shed light on irregular migration in particular.

In this paper, are discussed several issues concerning Pakistani migration to and through Greece in a socio-historical context, in which the immigration policies of Greece and Pakistan are systematically examined. One such fundamental question is how do the Greek policies of migration affect or even control the plans and actions of irregular migrants? And, equally important, what is the role of social networks in decision making processes leading migrants to travel to and stay in Greece?

IRMA  Background Report: “The vicious circle of irregular migration from Pakistan to Greece and back to Pakistan”