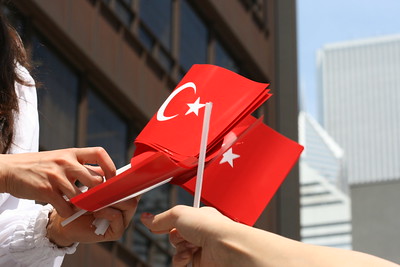 The supporters of the current Turkish government are currently espousing a significantly more robustly nationalistic attitude towards Greece and Greeks than the supporters of the opposition parties. This reflects the tendency to introversion now dominant in the AKP and MHP, the dynamic of social and political transformation within the Turkish opposition, and the deep polarization along party political lines in Turkey. In Greece, while there is greater homogeneity across the political spectrum, the overall levels of nationalism are significantly higher.

However, in terms of religiosity and education levels, the two countries seem to bear closer resemblance to one another, highlighting the vital role religion plays in both Greece and Turkey, and education’s ability to change perceptions of the Other.

These are some of the findings of a comprehensive survey conducted simultaneously in Greece and Turkey in two waves, in February and December 2021. The survey is the product of a research partnership between diaNEOsis, ELIAMEP and the Istanbul Policy Center (IPC), and was conducted by two leading polling companies: MRB in Greece and KONDA in Turkey. The same questions were asked to the Greek and Turkish sample.  In the second wave, a large part of the questions remained the same as in the first wave to either confirm the trends captured or highlight the dynamics of possible changes.

Most Greeks and Turks believe that the bilateral differences between Greece and Turkey can be solved by peaceful means.

Both waves of the poll indicated that most Greek and Turkish citizens continue to favor the resolution of bilateral disputes by peaceful means. In December, 62.2% of Greek and 57.7% of Turkish respondents agreed that Greek-Turkish disputes could be resolved through dialogue and understanding. In February, the same answer was given by 59% of Greeks and 70% of Turkish respondents. In December, 70.6% of Greeks and 57.8% of Turks said that the Turks/Greeks were neighbors and that a way of coexistence amicably with them should be found. In February, the corresponding percentages were 68% of Greek respondents and 73% of Turks. The proportion of Greeks and Turks who agreed that Greek-Turkish disputes could only be resolved by military means was around 16% in both surveys.

The survey team came up with four scales relating to how Turks see Greece and Greeks and vice versa. These are nationalism, enmity, security and defense, and reconciliation.

Nationalism in Turkey varies more between the supporters of the government and the opposition parties.

According to the findings of the survey, nationalism is at higher levels across the Greek political spectrum and with less differentiation between Right and Left, while levels of nationalism in Turkey vary more between the supporters of the government and the opposition parties.

In Turkey’s case, the highest levels of nationalism are recorded in the ruling alliance (the Justice and Development Party (AKP) and the Nationalist Movement Party (MHP)).

In Turkey’s case, the highest levels of nationalism are recorded in the ruling alliance (the Justice and Development Party (AKP) and the Nationalist Movement Party (MHP)). The government alliance is followed, albeit at notable lower levels, by the coalition of the Republican People’s Party (CHP) and the Good Party (IYI), a little lower are the levels of nationalism of the Democracy and Progress Party (DEVA) and the Future Party (Gelecek), while the Peoples’ Democratic Party’s (HDP) level is particularly low.

However, an upward trend was recorded in all parties, even the HDP, between the February and December polls. This could be explained by the surge in tensions between the two countries during that period.

The same trends are also captured in the set of criteria regarding enmity, with the supporters of the government showing the least interest in building interpersonal ties with Greece and Greeks, followed, with a significant gap in 2021 and less of a difference in 2022, by the supporters of the CHP-IYI alliance; supporters of DEVA, Gelecek and the HDP revealed even lower percentages.

These differences between the ruling and opposition parties can be explained by two main factors, one political and one sociological. Politically, these trends follow a broader trend towards greater introversion in the AKP vis-a-vis its identity and worldview. As Bekir Ağırdır suggests, the AKP has lost its ability to attract votes from different parts of society and has become an identity party, meaning a party that is seen to represent, and ultimately protect voters with a specific identity. This tendency towards identity politics has led to a rather introverted worldview among AKP voters, who tend to view those who are not like them with greater suspicion. Sociologically, as captured by the findings of the survey, too, AKP and MHP voters are less likely to have direct contact with Greeks and to travel to Greece than opposition voters; this also feeds into the more suspicious view of the other held by the AKP and MHP voters.

Suspicion levels are high across all parties, reflecting Turkish citizens’ broader and historically long-standing suspicion of foreign powers. The same doubt and negativity are recorded in Greek public opinion.

Similar dynamics were noted with regard to the criteria relating to the role of foreign powers, of whom government supporters are far more suspicious than opposition supporters. However, suspicion levels are high across all parties, reflecting Turkish citizens’ broader and historically long-standing suspicion of foreign powers. The same doubt and negativity are recorded in Greek public opinion.

It is noteworthy that these downward trends among opposition supporters in relation to nationalism, enmity and suspicion of foreign powers coincide with ongoing party polarization and reflect a significant transformation of attitudes within both the CHP and the IYI.

Within the CHP, the Leftist/Social Democratic segment of the party has gained in strength in the recent period in relation to the traditional Kemalist ultra-nationalists. Within the IYI, too, an attempt is ongoing to form a more moderate, bourgeois nationalism and shift the party towards the center-right.

Turning to DEVA and Gelecek, the strong tendencies towards reconciliation and lower trends of nationalism, enmity and suspicion towards foreign powers also coincide with the changing internal dynamics of “post-Islamism” and the normalization of the Turkish foreign policy advocated by the two parties, and by DEVA in particular.

Concerning the HDP, over and above the significant pro-Greek bias among the Kurds, the general ideology of the party, in which Turkish leftists are also actively involved, is relatively divorced from nationalism.

Education and Religiosity are Shaping Attitudes

Of particular interest are the dynamics of the criteria which relate to levels of religiosity. The trend in both Greece and Turkey is actually similar, the only difference being the higher overall levels of nationalism among the Greeks. The closer Turks and Greeks get to religion and religiosity, the more likely they are to manifest hostility, nationalism and suspicion towards foreign powers, and the less likely they are to support/believe in reconciliation.

In Turkey, religion is undergoing a transformation, with polls, surveys, and empirical observations documenting a slow but noticeable change in recent years, the key feature of which is a strengthening dynamic towards secularization  in the Turks’ relationship to religion.

The same trends are observed in relation to the level of education in the two countries: the higher the level of education, the lower the tendency towards hostility, nationalism and suspicion towards foreign powers, and the higher the tendency to embrace/believe in reconciliation. Again, for Turkey, educational levels have followed a highly dynamic course over the last two decades, with a growing number of people gaining access to higher education.

In conclusion, these dynamics indicate that it is unlikely that Greek-Turkish relations would be negatively impacted if the current Opposition parties were to form a new government in Turkey. The lower levels of hostility, nationalism and suspicion towards foreign powers and a higher tendency to embrace/believe in reconciliation among supporters of the opposition parties reflect more profound transformations within a very significant part of Turkish society, as well as changes within the opposition parties themselves.

The changing dynamics concerning religiosity and education in Turkey form part of these profound societal transformations, and confirm the trend towards social secularization and a more extroverted perception of the Other.