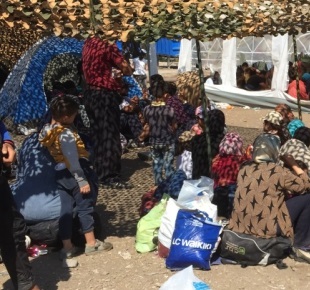 The mood in the EU since the New Year has shifted from trying to find a European solution to the refugee crisis to seeking a scapegoat. The convenient target has been Greece, the country where the great majority of refugees and migrants have been arriving. After a number of European countries closed their borders, the Commission has now warned Greece to address a number of problems in its refugee registration system or face suspension from the Schengen Agreement.

German Chancellor Angela Merkel’s decision to open Germany’s doors to refugees was commendable but extremely hard to implement because of the sheer numbers involved. Following on from the terrorists attacks in Paris last November, and with pre-existing Islamophobia in Europe reinforced by the sexual assaults in Cologne, this policy has gradually brought a strong negativity to Europe’s response to the refugee crisis. Disagreements have been especially pronounced in some of the eastern European countries, which have challenged European Council decisions for burden sharing in the re-allocation of refugees arriving in Italy and Greece. Some of these leaders seem to have conveniently forgotten that western Europe did not close its borders to them in 1956 or 1968.

There have no doubt been delays and omissions on the Greek side, caused by the large number of arrivals, the lack of sufficient personnel and equipment, and also by the economic crisis and current weakness of Greek public administration. But there is also a significant lack of trust from Greece due to the fact that out of a pledged 160,000 refugees that were to be relocated in other EU countries, only a few hundred have actually been transferred. Greece obviously cannot host, for longer than a few days, a number of people that could eventually reach 5% or even 10% of its population at a time when there are absolutely no jobs nor the capacity to offer these people even limited social benefits.

Furthermore, it wasn’t Greek policies that caused the conflicts in Syria or in Libya. Instead, it was the policy choices of certain other EU countries that did contribute to the deterioration of the security situation and have led to an increase in the flow of refugees. But this blame game leads nowhere. The priority should be dispersing such dangerous myths and presenting realistic policy recommendations for resolving the problems.

Our policies should be based on the following assumptions:

Greece should fulfil its commitments regarding hotspots and the full registration of all incoming refugees and migrants – with the provision of European economic support as well as manpower and equipment. At the same time, it should be crystal clear to all that maritime borders cannot be fully protected without cooperation from neighbours or without the use of force. “Push back” policies applied to small rubber boats filled well beyond capacity will only result to substantially increase the number of people – mostly women and children – drowning in the Aegean. Such policies would be both inhuman and illegal under international law. Greece cannot become a prison for several hundred-thousand irregular migrants, as recently suggested by a senior official from a founding member of the EU. The political, economic, security and, last but not least, human and moral costs involved would be enormous.

A quick end to the fighting in Syria through diplomatic means should be an obvious priority. Including Russia and, if possible, Iran in the process would considerably increase the prospects for an agreement. A well-organised and financially-supported reconstruction and reconciliation process may convince significant numbers of refugees that it’s safe to return home. In the meantime, increased support to Jordan, Lebanon and Turkey should be another important priority. Access to the labour market and the education system would be critical factors in a refugee’s decision on whether to stay in those countries or try to get to Europe. Increasing repatriation rates through agreements between the EU and important countries of origin should be another priority, although such an objective would be extremely difficult to achieve.

We also need various filters to decrease the attractiveness of the “Greek road”. The cooperation of Turkey – not yet visible – is of critical importance. But Ankara needs incentives as well, such as a visa-free regime, which is not expected to cause any significant flow of Turks to EU countries, and economic support. Turkey should also clamp down on traffickers and suspend its own visa-free regime for Moroccans and some other nationalities. The key element, though, would be to establish hotspots on Turkish soil for the direct resettlement of refugees in various EU countries. This would alleviate the pressure on Greece and save many lives in the Aegean.

Though an end to the Syrian drama will reduce the current numbers of asylum-seekers, migration flows caused by economic, environmental or security concerns will remain a major, even critical, challenge for Europe. So for the long term, the creation of a European Coastguard with extensive jurisdiction and better coordination between neighbouring countries, especially in the south, and between security and information agencies (also promoted by the establishment of the European Counter Terrorism Centre) would make an important contribution. Integration policies will also be of critical importance, but substantial challenges should be expected as not all refugees may be capable or even willing to be sufficiently integrated.