Does Immigration Grow the Pie? Asymmetric Evidence from Germany 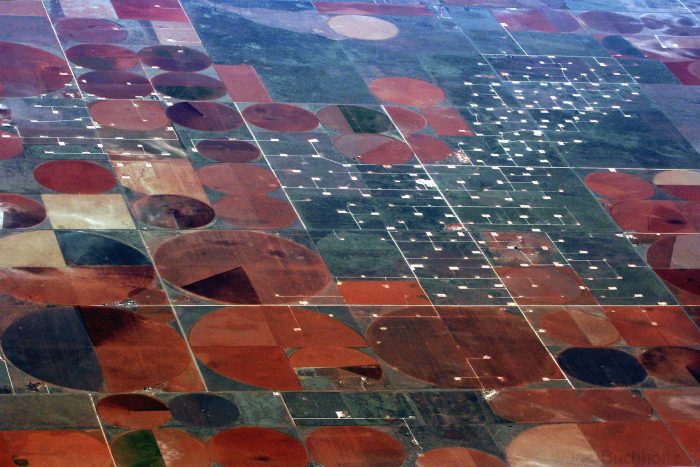 You may find it in pdf here.

The Alternative für Deutschland party in Germany, the UK Independence Party, and the Front National party in France, all gained prominence with anti-immigration platforms. Similar positions underpinned the Brexit vote and policies of the Trump administration. The perception that newcomers adversely impact natives in the labor market is one of the most often cited arguments in favor of immigration restrictions. Understanding the aggregate and distributional effects of migration is fundamental to curb the rise in xenophobic movements and to design effective policies.

“Understanding the aggregate and distributional effects of migration is fundamental to curb the rise in xenophobic movements and to design effective policies.”

So far, research on the macroeconomic effects of migration is relatively limited partly due to a lack of data at high frequency (quarterly or monthly). Based on population registers at the municipal level, monthly data on the arrivals of foreigners by country of origin is available since 2006 for Germany, which is the second-largest destination after the United States. The municipalities have a strong incentive to record new residents since their fiscal revenue depends on the number of registered, while they impose penalties on those not complying with the mandatory registration. The German economy forms an ideal laboratory to investigate the effects of mixed migration flows, defined as “complex migratory population movements including refugees, asylum-seekers, economic migrants and other types of migrants” (Perruchoud and Redpath-Cross 2011).[1] Immigration is a key determinant of changes in labor supply and, currently, the only source of population growth in the country. The German data enables us to study the potentially heterogeneous impact of migration from OECD and non-OECD countries, and the potentially asymmetric effects on natives’ and foreigners’ unemployment by education levels.[2] These channels remain little explored up to now.

Figure 1 shows the net migration rate in Germany by geographic origin. The net migration rate is computed as the ratio of inflows minus outflows of non-Germans to the working-age population. We observe a large increase during the period under study. Specifically, the total net migration rate (cyan line) rose from close to 0 percent in 2009 to 0.4 percent in 2014 and peaked at more than 1.8 percent with the refugee crisis in 2016. Notably, this significant increase is observed even if we exclude Syrian flows, which explain the bulk of the 2015-2016 spike (green line). We refer to this measure that is net of the Syrian flows as the baseline migration rate (blue line). Moreover, EU migration (orange line) was a key contributor to the rise in the net migration rate during the European sovereign debt crisis of 2009-2014. The surge is also certainly related to the Eastern enlargement of the EU. From 2015 to 2016, net migration to Germany fell by more than half, partly due to the closing of the Balkan route to extra EU migrants. Net migration from Poland and Romania was also considerably reduced, while there was negative net migration from almost all Balkan states. Net migration flows from OECD countries are of smaller magnitude than those from the EU member states due to negative values mainly for Canada, the US, Australia, and Japan in various years. The net migration rate from Africa peaked in 2016 at around 0.9 percent. Finally, between 2016 and 2018 the total net migration rate fluctuated between 0.4 percent and 0.6 percent and after 2018 it got stabilized close to 0.4 percent, which is higher than the level at the start of our sample.

“Contrary to the traditional view that migration causes slack in the receiving labor market by increasing labor supply, the effect is in fact ambiguous.”

Our empirical analysis places a special focus on the effect of net migration flows on unemployment. Contrary to the traditional view that migration causes slack in the receiving labor market by increasing labor supply, the effect is in fact ambiguous. It depends, for instance, on how fast immigrants enter the labor market and whether they do so as employed or job seekers. In addition, natives and immigrants are typically employed in different occupations, which makes them imperfect substitutes in production. Immigrants typically have a comparative advantage in manual-intensive tasks, while natives have a comparative advantage in language-intensive tasks. If domestic and immigrant workers are imperfect substitutes in production, increased migration inflows exert stronger competition on previous immigrants than on natives. Moreover, the job-creating response of firms may lower unemployment. Jobs can be created directly by self-employed immigrants or entrepreneurs and indirectly by immigrant innovators. Also, immigrants may boost technological adaptation, foster occupational mobility, and raise consumer demand. 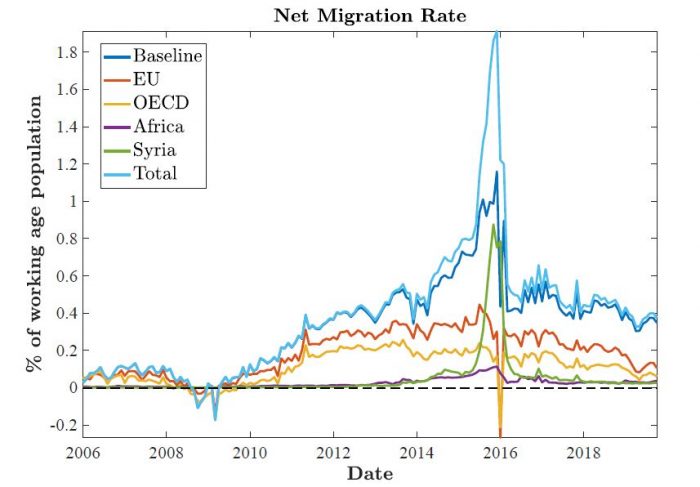 Contrary to the usual view, our study finds that immigration decreases labor market participation and increases wages. Immigration can stimulate productivity and wages when firms respond by expanding, investing, adjusting product specialization, adopting efficient technologies, and creating new businesses (Peri 2014).[3] The negative participation effect is driven by migration from non-OECD countries, suggesting a generally slow entry into the labor force in this case. Participation rates of asylum seekers are initially low and increase slowly over time (Brell et al. 2020)[4]. For instance, the majority of refugees who arrived in 2015-16 started to enter the German labor market in 2017. Lengthy asylum procedures impede investments in acquisition of the host country’s language and delay labor market entry.

We also show that migration boosts job openings and reduces unemployment. The fact that participation does not increase, along with the rise in wages and vacancies, suggest that migration impacts predominantly the demand side of the German economy. Consistently, we find that net migration increases industrial production, per capita net exports, tax revenue, per capita GDP, per capita investment, per capita consumption, and house prices. Skilled immigrants may contribute to a boost in private investment for example via the capital-skill complementarity channel. In terms of consumption, immigration explains around 10 percent of fluctuations.

The study also highlights the asymmetric labor market responses of natives and foreigners. Unemployment falls persistently for natives (job-creation effect), driving the decline of aggregate unemployment, while increasing for foreigners (job-competition effect). This finding goes against the common perception that newcomers adversely impact natives in the labor market. It also goes one step further by showing that the adverse impact falls upon the previous cohorts of immigrants. In addition, we demonstrate that the rise in foreigners’ unemployment is stronger in the case of immigration from Syria or Africa.

While employment increases both for natives and foreigners, the effect on labor market participation is also asymmetric. The results confirm that a decrease in foreigners’ participation drives the decline of aggregate participation, while natives see their participation rate increasing.

Distributional impacts within the groups of natives and foreigners

Even if unemployment, on average, falls for natives, it is still possible that some sub-groups are impacted by a dominant job-competition effect and are able to demand political protection against immigrants. To investigate the distributional impact, we consider unemployment rates by education levels. The Federal Employment Agency provides monthly data on the number of foreign and native unemployed workers from 2009:01 for three education groups: (a) without completed vocational training, (b) with in-company or school-based training, and (c) with an academic degree. We consider these groups as a proxy for low, medium and high-skilled workers, respectively.

Figure 2 shows the results from our econometric estimation. Specifically, the figure depicts the evolution of unemployment by education levels along a specified time horizon (measured in months here) in reaction to a net migration shock in Germany. We find that the asymmetric response of unemployment between natives and foreigners is confirmed for low-skilled workers and for medium-skilled workers. High-skill natives seem to experience a nil effect on average, rather than a decrease of their unemployment, while high-skill foreigners face increased unemployment. In other words, we do not find evidence of a significant job-creation effect for high-skill natives.

(from a structural vector autoregression model)

Note: The continuous lines represent the posterior median at each horizon and the shaded areas indicate the 68th posterior probability region of the estimated impulse responses. An impulse-response function describes the evolution of the variable of interest along a specified time horizon in reaction to a shock. The horizontal axis refers to time periods, measured by months.

As a next step, we take into account not only the educational level of the resident population but also the geographic origin of immigrants, which can be very diverse. The main finding of this analysis is that OECD-origin immigration shocks increase the unemployment rates of high-skilled natives, while reducing those of low-skilled foreigners. Immigration from Africa or Syria, on the other hand, entails an almost nil effect on high-skilled natives and a job-creation effect for low- or medium-skilled natives.

We thus conclude that only the high-skilled among the natives may be affected negatively by immigration in terms of unemployment. This happens in the case of flows from developed economies. Immigration flows from developed countries do involve a higher proportion – relative to developing countries – of high-skilled labor immigrants, who directly compete with high-skilled natives, for instance in occupations with language-intensive tasks.  At the same time, high-skilled immigrants create jobs, including for previous cohorts of low-skilled immigrants, by enhancing productivity through technological progress and spillovers, increasing consumer demand, and helping companies expand when filling critical roles.

Overall, a clear insight that emerges from the study is that immigration, like trade, enlarges the aggregate economic pie. The rise in wages, new hires, house prices, investment, consumption, output — and inflation and net exports for OECD immigration shocks — along with the reduction of unemployment, point to substantially positive demand effects. This finding suggests that we should no longer think of immigration merely as a supply shock in the economy.

Furthermore, the positive impact of migration in Germany seems to redeem the German phrase, Wir schaffen das (We’ll manage this), that Angela Merkel used in a statement five years ago, at the peak of the refugee crisis in Europe. “I put it simply, Germany is a strong country,” the German chancellor told the media at a press conference in Berlin on 31 August 2015, trying to address concerns about the steep rise in the number of people – mostly from Syria, Iraq and Afghanistan – applying for asylum in Germany that summer.

The Covid-19 recession is currently reviving the immigration debate in many countries. Our analysis contributes to a better understanding of the aggregate and distributional effects of immigration, which is crucial for the design and implementation of effective policies. The distribution of the economic benefits from immigration warrants attention from policymakers since immigration entails, on average, a job-creation effect for natives but a job-competition effect for foreigners. Moreover, the geographic origin of immigrants and the education level of locals introduce some heterogeneity in these effects.

“Consequently public policy debates may need to move away from immigration restrictions to protect group-specific interests to assessing redistributive strategies that ensure everyone participates in the aggregate gains.”

Consequently, public policy debates may need to move away from immigration restrictions to protect group-specific interests to assessing redistributive strategies that ensure everyone participates in the aggregate gains. These redistributive strategies should aim to ensure that the native-born and the foreign-born populations share the economic benefits of immigration. The design of such policies requires taking into account the two important dimensions of heterogeneity in the effects, namely the geographic origin of migrants and the education level of locals.

This Policy Brief is based on the findings of a Working Paper entitled “Does Immigration Grow the Pie? Asymmetric Evidence from Germany”, by Eugenia Vella and Nicolò Maffei-Faccioli (Postdoctoral Researcher at IGIER, Bocconi University).

[3] Peri, Giovanni (2014). “Do immigrant workers depress the wages of native workers?” In: IZA World of Labor.