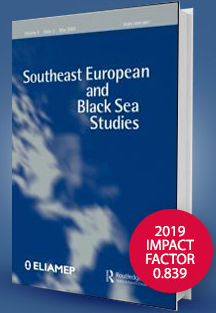 An academic article by George Siakas and Panagiotis Paschalidis has been published by the journal “Southeast European and Black Sea Studies” (Taylor & Francis). It is entitled “Variants of the ‘underdog culture’ in Greek public opinion: soft and hard-core Russophilia”.

Its main focus is on the phenomenon of Russophilia in contemporary Greek public opinion. One of its main contributions is a more comprehensive understanding of this feature within the wider context of Greek political culture. Russophilia, as the article concludes, can be interpreted as an outstanding feature of the ‘underdog culture’ in the Greek public opinion. However, an important distinction should be made between a soft and a hard-core component.