Observatory of the Albanian National Elections 2013 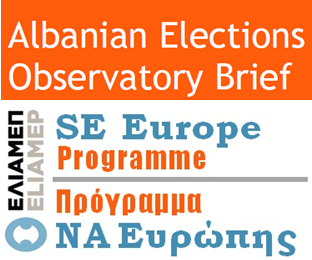 ELIAMEP’s South-East Europe Programme recognizing the importance of June 2013  parliamentary elections in Albania for the country’s EU accession process and the future of relations with neighbouring countries has initiated the Albanian Elections Monitoring Project.The project aims to understand the evolution of political dialogue in Albania and the shape of new political dynamics and trends by analyzing the platforms and pre-election campaigns of political parties and the post-election political landscape. The research focuses, among others, on issues such as EU integration and accession conditionality, functioning of democracy, economy and development, national identity, bilateral relations with Greece and other neighbouring countries. The post-election research will include analysis of the electoral results which will situate the 2013 elections in the broader context of post-communist political and electoral trends in the country.

The Albanian Elections Monitoring Project is publishing regularly briefs with data and analyses on the pre-election campaign and the Albanian elections in general, which are widely circulated to opinion and policy makers in Europea nd beyond.

The Albanian Elections Monitoring Project is co-chaired by Dr. Dimitri Sotiropoulos, Associate Professor at the University of Athens and Senior Research Fellow at ELIAMEP, and Dr. Ioannis Armakolas, Lecturer at the University of Macedoniaand Head of ELIAMEP’s South-East Europe Programme. Its members are Eda Gemi, Anastasis Valvis, Bledar Feta, Skerilda Agolli, Ermela Gianna and Milva Lambro. For more information on the project or to be included in the mailing list of the project’s regular updates and briefs contact: [email protected]