He graduated from high school in Michigan-USA, he got a B.A. degree in Political Science from Panteion University of Athens and a DEA Diploma (M.A.) in Theory and Sociology of Mass Media, from Paris 7 University –France.

He was correspondent for the newspaper «TA NEA» in Paris and for “TO VIMA” in Brussels. Afterwards, he became editor of European Affairs in «Kathimerini» newspaper.

He has been special Advisor to the Hellenic Foundation for Culture, to the Ministry for the Environment and the Ministry of Education. Also, he was councilor for the representations of European Commission and the European Parliament in Greece.

Actually, he works as journalist in the Greek Public Radio, Television and Internet (ΕRT) with specialty on European and International Affairs. Also, he is commentator and analyst in electronic editions and news sites.

He wrote the study “The youth and the use of Internet in Greece” (Publication of IOM-Kastantiotis 2008) and he was writer/editor of the EU Commission’s publication: “1976-2016-The 40 years history of the Representation of European Commission in Greece”.

Ηe chairs the Greek Section of the «UPF» (International Union of French Speaking Journalists and Media). 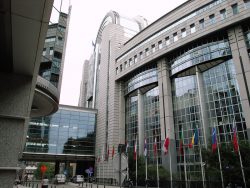