Public Debate organised by ELIAMEP and the French Institute in Athens: ‘Migration Governance’, 29/11/2012 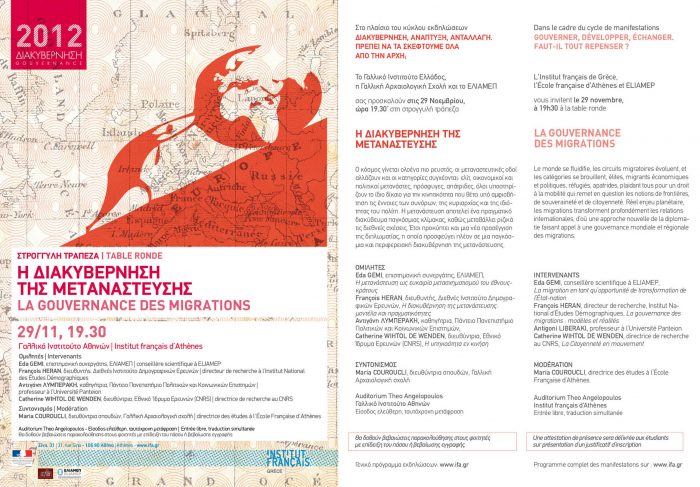 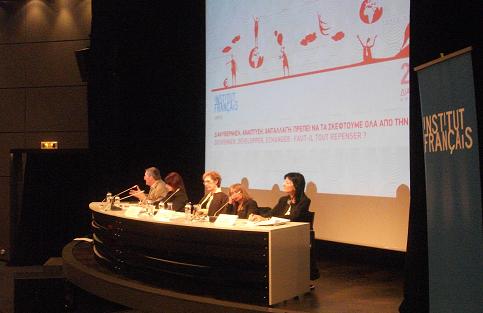 The Hellenic Foundation for European & Foreign Policy (ELIAMEP), the French Institute in Athens and Panteion University organised a public event on: ‘Migration Governance’ on 29 November 2012 at 19:30 in the ‘Theo Angelopoulos Auditorium’ of the French Institute in Athens. Speakers were: Eda Gemi (Research Associate of ELIAMEP), François Heran (Director of the National Institute of Demographic Studies), Antigone Lyberaki (Professor at Panteion University) and Catherine Wihtol de Wenden (Director of CNRS). The discussion was moderated by Maria Couroucli (Director of Studies, French Archaelogical School.

Dr. François Héran talked about the way immigration policy works in France, through a series of examples of French legislation in recent years. His speech, entitled The governance of migration: models and realities, focused particularly on the political debate on immigration in France – which, according to Dr. Héran, is superficial and lacks adequate documentation – and on the various levels of decision making, marked by a fragmentation of responsibilities which the recent administrative merging into one Ministry (of Migration) failed to address. Closing, Dr. Héran diagnosed in the French case a basic contradiction, pointed out also by the other contributors, namely the one between national sovereignty and immigrants’s rights.

Dr Antigone Lyberaki wondered about the challenge of immigration in times of crisis. She began by reminding that the transformation of Greece into a country of immigration happened in a very short period of time and was largely unexpected by the Greek state and society; but its implications have been had positive overall, as the economic prosperity of the period 1990-2005 was largely due to the contribution of immigrants. Dr. Lyberaki identified the difficulties the crisis imposes particularly on immigrants (joblessness, stricter policies, shrinking tolerance), but she expects most immigrants to remain in Greece, even though some may return or re-emigrate. Throughout her speech she highlighted the Greek polity’s failure to develop a coherent immigration policy, and stressed the necessity of doing so now, even if conditions are far less favourable.

Ms Eda Gemi spoke of immigration as an opportunity to transform the nation-state, focusing on the concept of citizenship, which she first outlined theoretically and then explored in the specific Greek context. More specifically, she focused on the two main issues that dominated the public discourse (and were recently judged ‘unconstitutional’): issuing the Greek citizenship to second-generation immigrants and granting political rights to long-term immigrant residents. Ms. Gemi underlined that the Council of State’s recent decision essentially restores the so-called ‘jus sanguinis’, neglecting the country’s multicultural reality and excluding approximately 10% of the population from political participation and a sense of belonging. She described this as a defeat of: the political system, the public discourse, and the immigration movement.

Dr. Catherine Wihtol de Wenden’s talk about ‘Citizenship in motion’, reflected on various emerging frameworks, practices and ideas that may constitute proposals for new international norms for unhindered mobility. Among them, she identified the deconstruction of the classical notion of nationality (no longer associated strictly with ethnicity), a shift from jus sanguinis to jus soli, or the recognition of dual citizenship, while transnational practices and identities are being generated on the ground. She then emphasised the relationship between cultural pluralism and democracy, and argued that diversity, defined as coexistence among multiple alterities, redefines the question of social solidarity. In short, Dr. de Wenden focused on citizenship, subject to ongoing negotiation and today in need for a contemporary, functional and humane reconsideration of its content.