Date
March 21, 2017
Project
Architectural replicas in the scramble for the past: Politics of identity in Istanbul, Athens, Skopje (REPLICIAS) 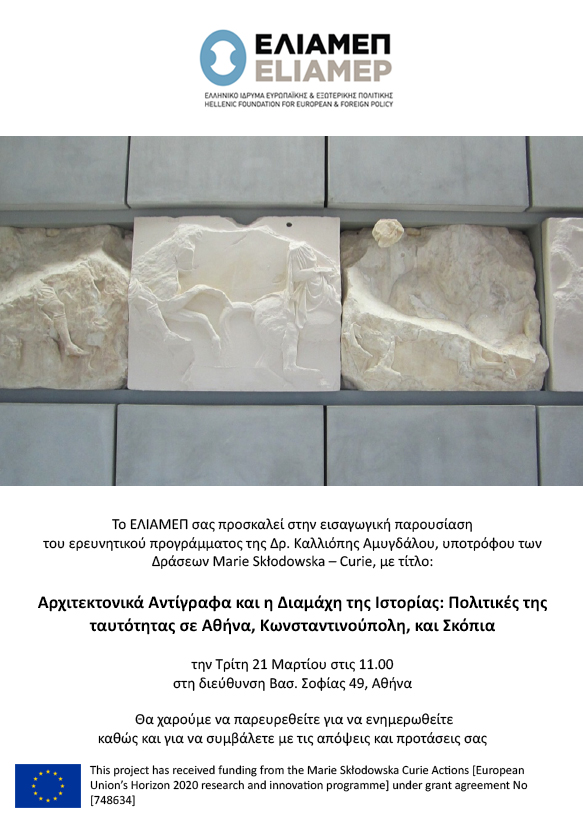 On Tuesday 21 March 2017, the latest research programme hosted by ELIAMEP and titled  ‘Architectural replicas in the scramble for the past: Politics of identity in Istanbul, Athens, Skopje’ (REPLICIAS) was presented for the first time. This project is carried out by Kalliopi Amygdalou, a Marie Skłodowska – Curie Fellow. Dr Amygdalou presented the research objectives and first findings of the project, which explores the politicization of cultural heritage through its reproduction/reconstruction in three cities of South-eastern Europe, and the way this affects the relations between the countries involved. The presentation was followed by a discussion with participants from ELIAMEP, the academic community and the field of heritage management. The research is supervised by Professor Thanos Veremis and Associate Professor Ioannis N. Grigoriadis.

It is noteworthy that ELIAMEP has hosted in the past many fellows who were funded by researcher mobility programmes such as the Marie Skłodowska – Curie Actions, and it is the first research institution in Greece that is hosting a programme in the humanities funded by the European Research Council.