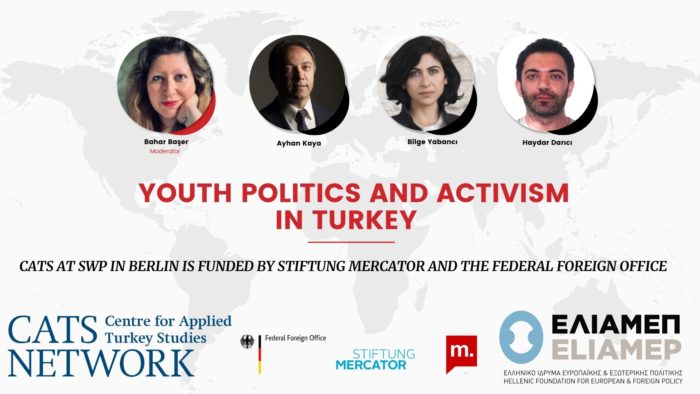 This webinar is dedicated to a discussion on youth politics and activism in Turkey. We will be hosting Professor Ayhan Kaya, Dr. Bilge Yabanci and Dr. Haydar Darici who are experts on Turkish politics with a specific focus on youth movements. We will discuss the trajectory of youth politics in Turkey under the reign of the AKP (Justice and Development Party) and examine the hurdles they are facing in “New Turkey”. What do young people expect from the future? How do they shape political processes and how are they shaped by them during the last two decades? What motivates young people to be politically active? How can we prevent youth disengagement and encourage participation? What do different political actors do to attract youth? The speakers will also address issues such as youth participation in civil society, trends in radicalisation and everyday resistance to authoritarianism.

Ayhan Kaya is Professor of Politics and Jean Monnet Chair of European Politics of Interculturalism at the Department of International Relations, Istanbul Bilgi University; Director of the Jean Monnet Centre of Excellence; and a member of the Science Academy, Turkey. He is currently European Research Council Advanced Grant holder (ERC AdG, 2019-2024). He received his PhD and MA degrees at the University of Warwick, England. Kaya was previously a Jean Monnet Fellow at the European University Institute, Robert Schuman Centre for Advanced Studies, Florence, Italy, and adjunct lecturer at the New York University, Florence in 2016-2017. He previously worked and taught at the European University Viadrina as Aziz Nesin Chair in 2013, and at Malmö University, Sweden as the Willy Brandt Chair in 2011. He is specialised on European identities, Euro-Turks in Germany, France, Belgium and the Netherlands, Circassian diaspora in Turkey, the construction and articulation of modern transnational identities, refugee studies in Turkey, conventional and nonconventional forms of political participation in Turkey, and the rise of populist movements in the EU. His recent manuscript is Populism and Heritage in Europe. Lost in Diversity and Unity (London: Routledge, 2019). His recent edited volume is Memory in European Populism (London: Routledge, 2019, with Chiara de Cesari). Some of his books are Turkish Origin Migrants and their Descendants: Hyphenated Identities in Transnational Space (Palgrave, 2018), Europeanization and Tolerance in Turkey (London: Palgrave, 2013); Islam, Migration and Integration: The Age of Securitization (London: Palgrave, 2012); Contemporary Migrations in Turkey: Integration or Return (Istanbul Bilgi University Press, 2015, in Turkish, co-edited with Murat Erdoğan), Belgian-Turks, Brussels: King Baudouin Foundation, 2008, co-written with Ferhat Kentel), Euro-Turks: A Bridge or a Breach between Turkey and the EU (Brussels: CEPS Publications, 2005, co-written with Ferhat Kentel, Turkish version by Bilgi University); wrote another book titled Sicher in Kreuzberg: Constructing Diasporas, published in two languages, English (Bielefeld: Transkript verlag, 2001) and Turkish (Istanbul: Büke Yayınları, 2000). He also translated Ethnic Groups and Boundaries by Fredrik Barth and Citizenship and Social Classes by T. H. Marshall and Tom Bottomore to Turkish language. He also edited several books on migration, integration, citizenship, and diasporas. Kaya’s publications have been translated to several languages such as French, German, Japanese, Italian, Arabic and Dutch. Kaya was actively involved in two FP7 and three Horizon 2020 projects, and now he is involved in two different Horizon 2020 research projects on migration. Kaya received Turkish Social Science Association Prize in 2003; Turkish Academy of Sciences (TÜBA-GEBİP) Prize in 2005; Sedat Simavi Research Prize in 2005; Euroactiv-Turkey European Prize in 2008, the Prize for the best Text Book given by TÜBA; and also the Prize for excellence in teaching at the Department of International Relations, Istanbul Bilgi University in 2013 and 2017.

Haydar Darici is a postdoctoral fellow in Kurdish Studies at American University in Washington DC. He received his Ph.D. from the joint program in Anthropology and History at the University of Michigan, Ann Arbor. His work has focused on youth politics of resistance in the Kurdish region of Turkey.

Bilge Yabanci is a Global Marie Curie fellow at Northwestern University (USA) and Ca’ Foscari University of Venice. Her research is interdisciplinary and connects theoretical and conceptual borders of political science, sociology, and political psychology. Specifically, she is interested in social movements and civil society under autocratization, populism, and the role of affect and performance in political mobilization. She has expertise in site-intensive interpretive research methods that spans over a decade and across 7 countries.

In her current project, she investigates alternative communicative strategies that reframe migrants and refugees as ‘deserving’ and ‘rights-bearing agents’. Aiming to go beyond descriptive approaches that dominate social sciences in general, in her project she combines fieldwork, network analysis, surveys and online randomized experiments to predict how social change for more inclusive societies can be initiated. This research aims to offer policy-relevant alternatives to change racialized attitudes of various ideological, socio-economic, and psychographic groups as well as non-citizens (migrants and refugees).