Online discussion: “The Role of Women in Turkey’s Public Life” 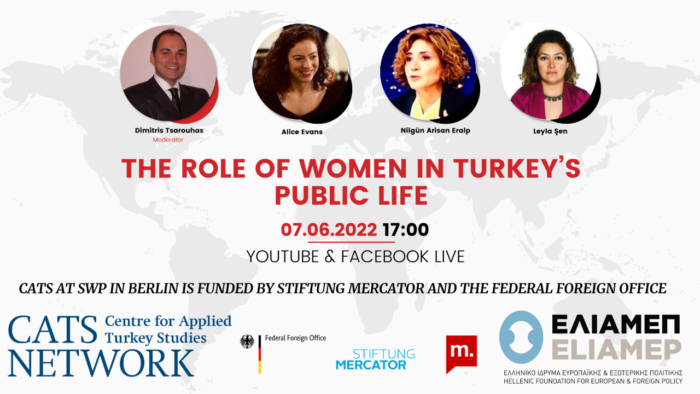 Despite having gained the right to universal suffrage as early as 1934, Turkish women are nevertheless experiencing discrimination effects in their full and active participation in civic life. This is especially pronounced in the labour market. With a female employment rate of 34% in 2019, Turkey has yet to tap into the huge economic and social potential that its ever more educated female population can offer. What is more, the COVID—19 pandemic has been especially challenging for women in Turkey, since women have disproportionately retired from the labour force after the outbreak of the coronavirus pandemic. At the same time, and as part of international and regional obligations, Turkey is committed to address gender disparities and improve the well-being of more than half of its population. The recent decision by state authorities to withdraw from the Istanbul Convention has generated controversy inside the country and outside it, not least due to a number of high-profile cases pertaining to abuse and killing of innocent women. Drawing on the expertise and real-life experience of experts and activists on the ground, this broadcast will shed light on the current status of women in Turkey’s public life.

Dimitris Tsarouhas, PhD is Visiting Associate Professor at the Department of Political Science, Virginia Tech, and Associate Professor at the Department of International Relations, Bilkent University, Turkey. He is a Non-Resident Senior Research Fellow at the Hellenic Foundation for European and Foreign Policy (ELIAMEP) and a Scientific Council Member of the Foundation for European Progressive Studies (FEPS) in Brussels. Previously, Tsarouhas has been an Adjunct Professor in Political Science at George Washington University (2018-2020), a Visiting Scholar at the BMW Center for German and European Studies, Georgetown University (2018-19), a Visiting Fellow at the School of Business & Management, Queen Mary, University of London (2015) and a J. Costopoulos Research Fellow at Istanbul Bilgi University (2008). He has also been Jean Monnet Chair in EU Politics (2012-2015) and Head of the Department of International Relations at Bilkent University (2013-2016).

Tsarouhas is a consultant to the World Bank, Governance Global Practice. Apart from offering policy advice to policymakers in the European Union institutions and Turkey, he is the author of policy reports for PricewaterhouseCoopers (2014) and the International Institute for Democracy and Electoral Assistance (IDEA) (2019). He is a frequent contributor to the international media on current affairs, both print and electronic, including Euronews, Arab News, TRT World and Voice of America. He is fluent in English, German, Greek, Turkish and Swedish.

Eralp worked as an advisor from 1987 to 1996 in several senior public authorities including Ministry of State in charge of  EU Affairs and Deputy Prime Ministry, and Prime Ministry of Turkey. From 1990 to 1992, Eralp worked as an expert in State Planning Organization, Directorate General for EU Affairs. In 1996 Eralp coordinated the ‘Information Network Project for Small and Medium Sized Enterprises on Customs Union’ jointly financed by the Economic Development Foundation (İKV) and the European Commission. Between 1997 and 2000, Eralp  functioned as the Head of Department of Policies and Harmonization in the Directorate General for the EU Affairs at State Planning Organization. After leaving this  position ,  Eralp served as the Director of National Programme in the  Secretariat General for the European Union Affairs (EUSG) until 2009. Throughout this period Eralp has been a Member of Academic Board in European Research Centre, Ankara University on behalf of the EUSG. Eralp has lectured in several universities on EU and Turkish and EU relations and has several publications on the same topic.

Nilgün Arısan Eralp has been working at TEPAV since 2009 as the Director of the  Center for EU Studies.

Dr. Leyla Şen graduated from Hacettepe University. Gets Masters and Ph.D. degree from the Bilkent University in the field of contemporary history and political economy of development. She has more than 25 years of experience mainly at the international organizations including the UN and the EU in programs addressing to development challenges in the field of poverty, gender equality, democratic governance, social cohesion and institutional capacities. Since September 2021, she is the Team Leader of a EU-funded project addressing women empowerment through cooperatives.

Dr. Alice Evans is a Lecturer at King’s College London and a Faculty Associate at Harvard’s Center for International Development. She holds a PhD in Geography from the LSE and her extensive record of academic publications and public policy engagements focus on gender equality from a variety of different perspectives. Her most recent book entitled The Great Gender Divergence and is forthcoming from Princeton University Press.