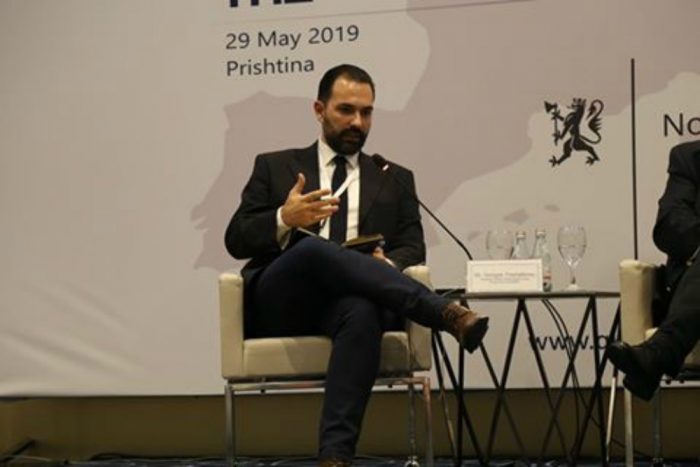 Dr. Giorgos Triantafyllou, Research Fellow with ELIAMEP’s South-East Europe Programme, participated in an international conference on the occasion of the 20th anniversary of NATO’s intervention in Kosovo. The conference, which took place on May 29th in Pristina, was titled “Twenty Years After: Perspectives and Challenges for the Western Balkans” and it was co-organised by the Kosovar Centre for Security Studies (KCSS) and the Balkan Policy Research Group (BPRG), with the support of the Norwegian Embassy and the Open Society Foundation. The conference touched upon some of the most important challenges regarding the Western Balkans’ integration in the euroatlantic security structures. Dr. Triantafyllou was invited to sit in the panel on “Peacekeeping Missions and Integration: cooperation between NATO and Western Balkan countries”, together with Mr. Burim Ramadani, Deputy Minister of Defense of the Republic of Kosovo and Mr. Arian Starova, Chairman of the Atlantic Council of Albania. The panel was moderated by Mr. Lulzim Peci, Executive Director of the Kosovar Institute for Policy Research and Development (KIPRED).