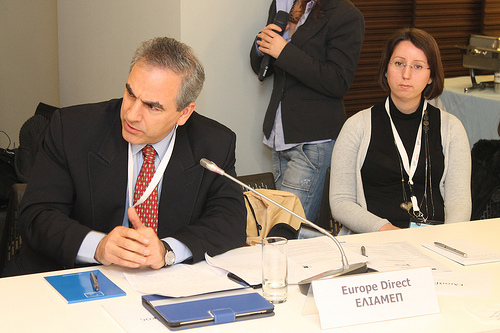 On Thursday 21 February the Commissioner for Maritime Affairs and Fisheries, Ms. Maria Damanaki, also addressed the meeting. Inter alia, Ms. Damanaki underlined that “the network is ideally situated to support the European Year of Citizens and to defend the European values, on which the European Union was built and which unfortunately are being weakened by the brutality of the crisis. You have the opportunity to work on a local level with the citizens and to listen to their worries and ideas. The network is the “first door” (one-stop shop) that every citizen can easily “knock” on in order to find information about the EU, its policies, its legislation and the funding opportunities it offers.”

On behalf of the center hosted at ELIAMEP the meeting was attended by Ms. Elizabeth Phocas and Ms. Alexandra Nikolakopoulou, manager and coordinator of the center respectively. At the opening session of the meeting Dr. Thanos Dokos, Director General of ELIAMEP, made the welcoming remarks.