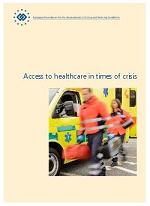 Research Project by Eurofound, where the Crisis Observatory also participated by examining Greece as a case study. The aim of the research programme was to record the impact of the crisis on citizens’ access to health services as well as to highlight best practices and initiatives that can be applied in the administration of health services’ units during the crisis.

The research team constisted of the following scientists: Dimitris Katsikas (Head of the Crisis Observatory), Maria Zafiropoulou, Health Issues Expert in the European Commission (and member of the Observatory Plus team), Charalampos Economou, Assistant Professor at the Department of Sociology of the Panteion University of Social and Political Sciences, Daphne Kaitelidou, Assistant Professor in the Department of Nursing(University of Athens), and Olga Siskou, Head Researcher at the Center for Health Services Management and Evaluation (University of Athens) as well as deputy national representative in the Health Committee of the OECD.

Along with effective prevention and social protection policies, access to high-quality healthcare services can reduce health inequalities, social exclusion and poverty, key objectives of the Europe 2020 strategy. At the same time, timely access to healthcare can prevent higher healthcare costs in the long run, increase productivity of the workforce and facilitate people’s active participation in society, as emphasised in the European Commission’s Social Investment Package. Furthermore, access to healthcare under the conditions established by the Member States is recognised as a fundamental right of the European Union.

Difficulties in accessing healthcare have long been more common among certain population groups. In some cases, measures facilitating access for these groups have been cut. While there is great heterogeneity within these groups, they include people living in countries with poor overall access or in remote areas; those with low health literacy, poor education and low incomes; people with greater healthcare needs in general (such as people with disabilities, elderly people and people with chronic illnesses); or those who belong to a specific disadvantaged ethnic minority (such as Roma), as well as homeless people and migrants.

The crisis has resulted in the emergence of new groups that were not considered vulnerable previously due to increased unemployment, especially among young men, and increased household debt problems, particularly for young couples facing housing and job insecurity. People have found themselves in more vulnerable situations because of the crisis, particularly those who have experienced:

Most service providers in the case studies reported a range of responses to sustain access during the crisis, including economising, seeking funds from other public sources, and leniency in enforcing copayments for people in need. Some governments have sustained or expanded coverage and exemptions from copayments for population groups affected by the crisis. Other strategies identified in the research include:

Policymakers and service providers need to be aware of the unexpected or indirect consequences of cuts and reduced disposable income on access to services. In some countries, demand for nursing home care has declined because the pensions of elderly relatives are an important source of household income (Hungary, Latvia). In some cases, people have moved from private to public healthcare creating increased demand (Greece, Ireland, Slovenia), while in others private hospitals have gained more clientele (Bulgaria, Romania, Sweden) partly as an indirect consequence of the crisis.

Simple cost-cutting solutions may incur higher costs in the longer term. It is important to be wary of increased use of emergency and inpatient care. In some countries, inpatient care has increased because family members cannot afford to keep patients at home (Bulgaria and Slovenia) or because of cuts in outpatient care (Ireland). In other cases, demand for emergency care has increased because it is cheaper to access, payments due from patients are less likely to be collected, there is no nearby non-emergency care, or the facilities are open at more convenient hours (Bulgaria, Greece, Ireland and Sweden).

In addressing the challenge of maintaining access in the context of the crisis, policymakers and service providers may consider: