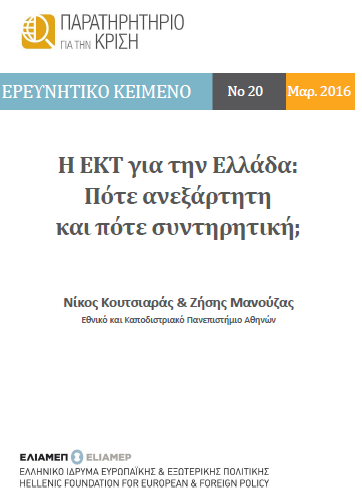 During the first and seemingly untroubled decade of the EMU, the ECB de facto (and through interest rate policies and pledges), encouraged Greece’s excessive lending and therefore contributed to rather than hindered the worsening of the Greek twin deficits. To be exact, the ECB facilitated, rather than discouraged the reckless and carefree domestic political economy – facilitated, in other words, the neglect of the country’s structural and macroeconomic adjustment. When the crisis occurred, the ECB strongly opposed the restructuring of the Greek public debt in time, in the face of undeniable, almost empirical data, for the sake of financial stability in the euro area (and, in particular, for the benefit of banks holding Greek bonds). Instead of the timely debt restructuring, the ECB supported the Greek government’s official lending and also gave liquidity to the Greek banks, exceptionally accepting the devalued bonds of the Greek government – some of which it buys in the context of the (emergency) securities purchase program, without being damaged when, afterwards (2012) and, perhaps very slowly, the restructuring of the Greek debt to the private sector is attempted. As a counterpart to this, the ECB is pushing through its troika participation for rapid (and self-evidently) fiscal consolidation and institutional economic deregulation. However, the ECB’s (controversial) attitude regarding the provision of liquidity support by the Bank of Greece to commercial banks is decisive, influencing and, to a large extent, determining the outcome of the Greek government’s negotiation with its creditors in July 2015. The ECB’s behavior is a fatal expression of its position and role as the central bank of a currency union (heterogeneous economies) that dislikes transfers. Finally, the behavior of the ECB seems to be in line with a tradeoff approach between independence and conservative (anti-inflationary) persistence – calling into question the conventional perception of their positive interdependence.