Social Profile Report on Poverty, Social Exclusion and Inequality Before and After the Crisis in Greece 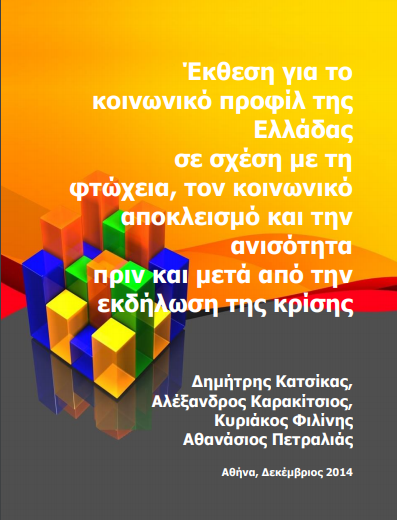 This report is the result of research conducted in the context of the research programme “Fragmentation and Exclusion: Understanding and Overcoming the Multiple Impacts of the European Crisis” (FRAGMEX). FRAGMEX takes place under the auspices of a bilateral programme of cooperation in Research and Technology, between Greece and Germany for the period 2013-2015 and is funded by the Greek General Secretariat for Research and Technology and the German Federal Ministry of Education and Research. Along with the Crisis Observatory, participants to the programme include the Hellenic Open University, as well as the University of Duisburg-Essen and the University of Bonn.

The structure of the report is as follows: First, we present an overview of the Greek crisis during the past five years and demonstrate some of the most significant changes in terms of overall economic performance and well-being. The next section introduces a discussion of definitions of the concepts analysed in this report and the methodology employed. The following sections then outline the profile of poverty, social exclusion and inequality in Greece before and after the crisis. Next, comes a section on the contribution of social policy to the alleviation of poverty, social exclusion and inequality before and after the crisis in Greece. A final section summarizes the findings the report.

The findings of the report were presented during the 2nd Annual Conference of the Crisis Observatory, entitled: “The Social Consequences of the Crisis in Europe and Greece: Politics and Policies for Solidarity and Growth“.

View full text of the report