Dr  Theodoros Tsakiris is an Assistant Professor at the University of Nicosia specializing on the geopolitics and economics of hydrocarbons.

In March 2014, Dr. Tsakiris was appointed as a Member of the Board of Directors in the Cyprus Hydrocarbon Company, the National Oil & Gas Company of Cyprus. In September 2014 he was appointed by the President of Cyprus to serve at the Presidential Council for Geostrategic Studies a consultative body that advises the President on geopolitical issues. He resigned from both offices in July 2015.

Since 2011 he has been directing ELIAMEP’s Energy Program and during 2013-2014 was an Associate of the Southern Europe Programme at the LSE Ideas think-tank of the London School of Economics. He holds a Ph.D in Strategic Studies (2008) from Panteion University of Athens and a M.A (2002) in International Security from Georgetown University where he studied under a Fulbright Scholarship. He has also received scholarships from the EU and the Leventis and Voudouris Foundations.

From January to June 2010 Dr. Tsakiris worked with the Office of the Deputy Minister for Energy of Greece as a special scientific adviser focusing on international oil & gas projects. In 2008-2009 he served as the Head of the Policy Making Unit at the Special Secretariat for International Energy Policy of the Hellenic Ministry of Development. Dr. Tsakiris also held policy-making research & advisory positions in the Greek Parliament’s Foreign & Defense Committee, the Greek Ministry of Foreign Affairs and the Greek Ministry of Defense through the Defence Analyses Institute.

Between 2013-2015 Dr. Tsakiris was also part-time lecturing on issues of International Energy Policy at the Diplomatic Academy of the Greek Ministry of Foreign Affairs and the National Security College of the Greek Police Academy.

He is the author of 3 monographs and 31 book chapters and articles in English and Greek including publications in peer-reviewed journals such as Comparative Strategy, Foreign Affairs (Hellenic Edition), Perceptions, Journal of Energy Security, Journal for Southeastern Europe & Black Sea Studies, Mediterranean Quarterly, and Journal of Transnational Management.

Dr. Tsakiris’ work has been cited in academic publications prepared for and published by, George Washington University, King’s College London, the Geopolitics of Energy Project of the Belfer Center for Science & International Affairs of Harvard University and the Energy Initiative Program of MIT.

Dr. Tsakiris is a regular commentator on energy policy issues for SKAI TV & SKAI Radio, SBC Channel 7 and Athens 9.84 Radio. He has also been interviewed by or written op-eds on issues of international energy for Le Monde, Deutsche Welle, El Mundo and Gazprom’s bi-monthly publication Blue Fuel. He has a regular column on the Greek energy portal www.energypress.gr and the Sunday edition of Cyprus’ biggest daily newspaper Fileleftheros www.philnews.com FEUTURE Online Paper No. 22: Gas Developments in the Eastern Mediterranean: Trigger or Obstacle for EU-Turkey Cooperation? 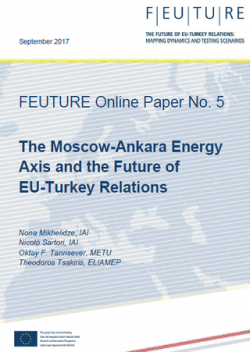 FEUTURE Online Paper No. 5: The Moscow-Ankara Energy Axis and the Future of EU-Turkey Relations 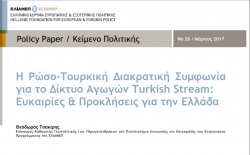 Greece and the 'Turkish Stream' pipeline

ELIAMEP joins the debate on the Ukrainian crisis

ELIAMEP briefing not analyses relations between Israel and Turkey

ELIAMEP Working Paper explores energy parameters of the evolving crisis between Russia, the EU and Ukraine 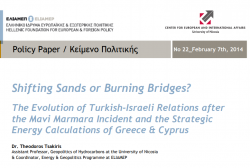 Briefing Note: 'The game of Noble: A new policy of the American company in favour of the pipelines?'

Briefing Note: 'The case against an Israeli-Turkish export pipeline'

Briefing Note: 'The feasibility and impact of the Turkish-Israeli rapprochement on the Geopolitics of the Eastern Mediterranean'

Briefing Note: 'The perspectives for Cypriot gas development after the second stage of co-operation agreements'

Briefing Note: 'How competitive is a Cyprus-Turkey pipeline?'

Briefing Note: 'The agreements between Nabucco and Shah Deniz'

Briefing Note: 'Potential Unfulfilled? What lies ahead for Cypriot-Israeli co-operation in 2013' 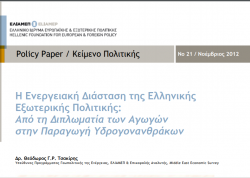 Analysis of Dr. Theodore Tsakiris on the Southern Gas Corridor and Azerbaijan's policy

Briefing Notes: 'Jumping off the ship? What does MOL's withdrawal signify for Nabucco's Future 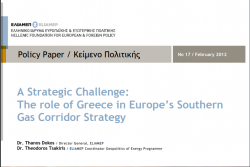 A Strategic Challenge: The role of Greece in Europe’s Southern Gas Corridor Strategy 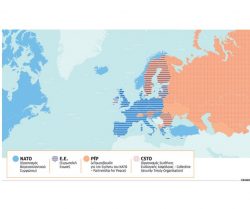 Participation by Dr Theodore Tsakiris at the INYT conference in Athens

Participation by Dr Theodoros Tsakiris at international conferences in Brussels,07/11/2013

Participation by Research Fellow of ELIAMEP Dr Theodoros Tsakiris in an international conference in Cyprus, 19/06/2013 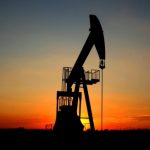 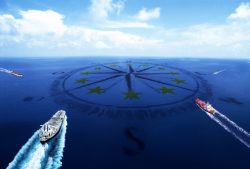 Participation by Director General of ELIAMEP, Dr. Th. Dokos and Research Fellow Dr Th.Tsakiris in a conference of EDAM and FES

Participation of Dr Theodore Tsakiris in the Energy Money Conference 2012

Participation of Dr. Theodore Tsakiris in an international conference in Cyprus 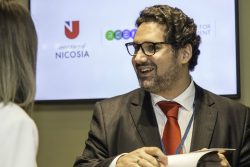 "The danger of a new impasse" - Article by T. Tsakiris in "ETHNOS" newspaper

Dr Theodore Tsakiris analyses the visit of Tsipras to Moscow on energypress.gr 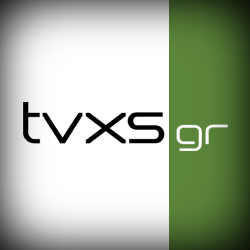 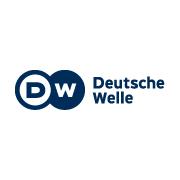 Article by Dr. Thedore Tsakiris in The Economist supplement of Kathimerini