Evangelos Georgousis is Honorary Commander of the Hellenic Air Training Command. He graduated from the Hellenic Air Force Academy (43rd Graduating Class). He received a broad training on specialized Air Skills Schools, Air War Schools, among which the Air University / Air War College in the U.S.A., the School of National Defence in Greece and numerous schools and courses abroad (NATO , England, Italy, Germany).

After his retirement, he worked in the private sector as a business consultant and as the Administrative Manager of an aircraft hangar manufacturing company.

He served as the elected President of the Hellenic Air Force Academy Alumni Association for seven years.

He is an elected member of the Board of Directors of the Association of National Defence Staff and Head of its Research Division. 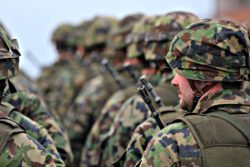