Dr. Ioannis Armakolas, Assistant Professor at the Department of Balkan, Slavic and Oriental Studies, University of Macedonia and Head of the South-East Europe Programme at ELIAMEP, recently spoke to the North Macedonian MIA News Agency. He shared his views on the ongoing debate on the French proposal to change the current process of enlargement for the European Union, as well as the recent meeting of the Greek Prime Minister with Zoran Zaev in Thessaloniki. 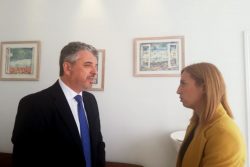 These are some of his remarks:

About the changes regarding the enlargement process:

About the decision against the decoupling of North Macedonia from Albania at the last European Council meeting:

You can read the full interview here.