Turkey returns to its strategy of forcefully escalating tensions in the Eastern Mediterranean – An interview with P. Tsakonas 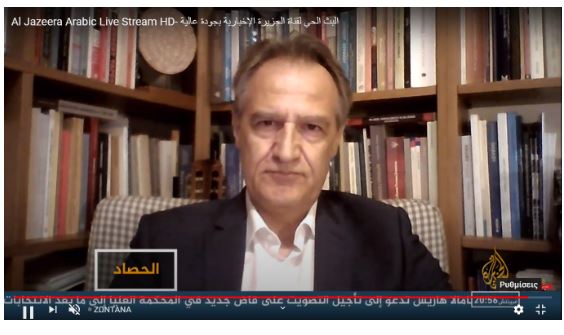 In his interview with Al Jazeera, Professor Panayotis Tsakonas discussed Turkey’s departure from what has been agreed so far in the exploratory talks. Turkey, he said, has returned to its strategy of forcefully escalating tensions in the Eastern Mediterranean, both with Cyprus and Greece. The reopening of the Varosha beach resort has agitated Cyprus, while the movements of survey vessel Oruc Reis and an illegal NAVTEX have raised tensions with Greece. Professor Tsakonas pointed out that Turkey is losing trustworthiness and many global actors now recognize Turkey as the agitator and the threat to stability in the Eastern Mediterranean.