The Grassrootsmobilise team’s 8th Research Meeting was held in Athens on the 10th and 11th February, 2017. The main aim of the meeting was to discuss the postdoctoral researchers’ recent reports on references to the ECtHR’s religion-related case law in national high courts, as well as their work exploring mobilisations before and after particular ECtHR cases against the respective countries (Vallianatos v. Greece, Costa and Pavan v. Italy, Sindicatul “Păstorul cel Bun” v. Romania, and Ercep v . Turkey). They were joined in Athens by Advisory Board Member Professor Lucy Vickers, who offered constructive feedback on these aspects of the research, and received further feedback in writing from Advisory Board Member Professor Matthias Koenig on the single ECtHR case studies. During the meeting the team also discussed their plans for publications arising from this research, as well as publications based on the research related to the legal status of religious minorities. 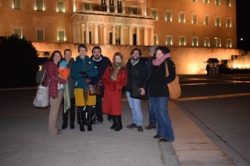