Date
July 15, 2021
Time
10:00-13:00
Location
Serafio, Sports, Culture and Innovation Center of the Municipality of Athens
Project
“Resilience and Recovery in Greece” – a Hub for Climate Change 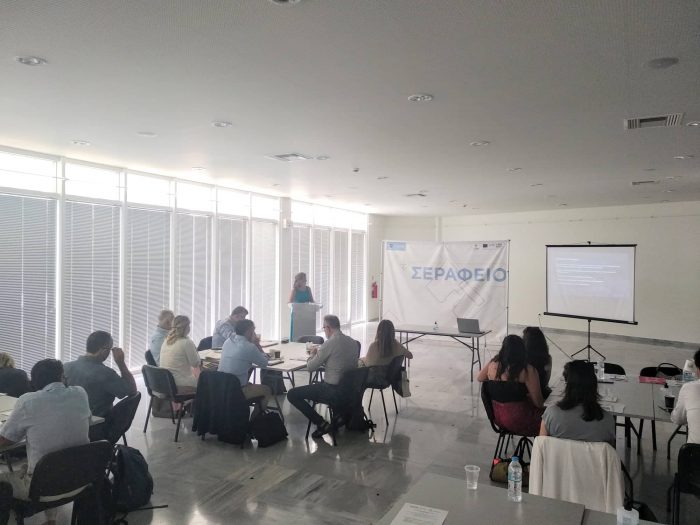 On Thursday, July 15, the first closed working meeting of the “Resilience and Recovery in Greece and SE Europe” initiative took place in the Event Hall of the Exhibition Space in Serafio, Sports, Culture and Innovation Center of the Municipality of Athens.

The objectives of the Meeting were:

– to bring together a diverse cross-sectoral group of key stakeholders,

– inform them of the establishment of a Hub for Climate Change,

and to to record the main conclusions and proposals for enlargement of participating in the Program and identifying the next steps.

Mrs. Maria Logotheti, the Program’s Head, explained the broader context in which the Hub will operate and outlined the core gaps that the hub will address. Mrs. Emmanuella Doussi, EKPA Professor, emphasized that climate neutrality will be realized through establishing communication bridges with civil society. Mr. Dimitris Lalas, former President of the Observatory, demonstrated the importance of the current situation and the role of citizens in achieving national goals using scientific data. The Executive Director of FOGGS Foundation Mr. Georgios Kostakos highlighted the major themes from the coordinated talks at the round tables. Representatives of the Program partners attended the closed working meeting. ELIAMEP was represented by the Director General of the Foundation Mr. George Pagoulatos, the Democracy & Culture Foundation (DCF) by the Vice President of the Board Mr. Antonis Kefalas and Resilient Cities Catalyst (RCC) by Ms. Konstantina Karydi, RCC representative in Europe. The meeting ended with the identification of the next steps for the design of the Program.