Lecture by President of Eurogroup and Minister of Finance of the Netherlands, Jeroen Dijsselbloem, 31/05/2013 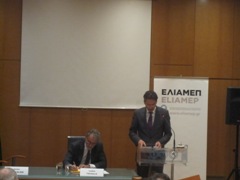 On Friday 31 May 2013 the Crisis Observatory of the Hellenic Foundation for European and Foreign Policy (ELIAMEP) and the Embassy of the Kingdom of the Netherlands in Athens organised a lecture of President  og Eurogroup and Minister of Finance of the Netherlands, Jeroen Dijsselbloem. The title of his speech was: “Working together towards European recovery”. Professor Loukas Tsoukalis, President of ELIAMEP moderated the discussion, the video of which is available here.

Mr Dijsselbloem focused on the ways to overcome the challenges in the eurozone and on how to deliver sustainable growth. Conscious of the difficult times that Greece is going through and of the enormous efforts made by the Greek people, he identified a number of positive signs for the future of the Greek economy and acknowledged the fact that Greece is making progress in the right direction: towards growth and jobs. Furthermore, he referred to the strategy of the eurogroup, which is based on the following three pillars: