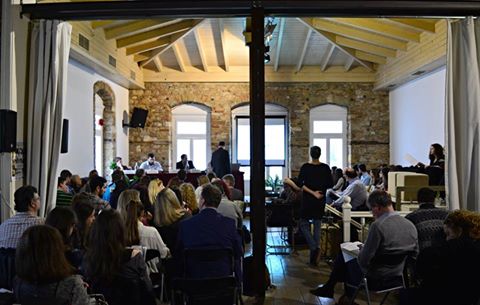 The final conference of the research programme Fragmex, entitled “Fragmentation and Exclusion:  Understanding and Overcoming the Multiple Impacts of the Crisis” and organized by the Crisis Observatory of ELIAMEP and the Hellenic Open University, was held with great success.

The topic of the first unit of the conference was entitled “Crisis and Society (I): Consequences and Public Policy”.

Dimitri Sotiropoulos, associate professor at the Department of Political Science and Public Administration of the University of Athens, during his presentation entitled “Social policy during the crisis: replacement of the state by civil society?”, developed the idea of the double mismatch, the insufficient response of the social state compared to the extent of the social problems in the midst of the crisis, as well as the insufficient understanding of those problems by policy makers. Felix Tirschmann, PhD candidate at the University of Bonn, during his presentation entitled “Poverty and social exclusion: The view from Germany”, analyzed how the phenomena of poverty and social exclusion are faced by the German society.

Panos Tsakloglou, professor of Athens University of Economics and Business, commented on the preceding presentations and emphasized the necessity for an effective exploitation of the few Greek welfare state resources, so that the vulnerable population groups are protected either via the use of a complete social protection system (for example the system of the guaranteed minimum income) or via targeted actions.

The topic of the second unit of the conference was entitled “Crisis and Society (ΙΙ): The Reaction of Civil Society”.

Maria Zafiropoulou and Aspasia Theodosiou, researchers of the Hellenic Open University, during their presentation concerning the civil society’s reaction, discussed the theoretical framework, taxonomy and mapping of social solidarity actions by NGOs and informal social networks.

Vasilis Stefanis, researcher of the Hellenic Open University, presented the possibilities of the interactive online platform of social networking, which the HOU developed during the project, and explained the audience how it works.

The topic of the third unit of the conference was “Greece, Germany, Europe: Public Discourse and Attitudes in Society and Politics during Crisis”.

Dimitris Katsikas, head of the Crisis Observatory of ELIAMEP, presented data from opinion surveys about the image of Germany and the EU in Greece and by summarizing the findings of the preceding presentations he highlighted some common concluding remarks and discussed their possible impacts on the future of European integration. Konstantinos Maras, researcher at the University of Duisburg-Essen, presented the image of Greece in the German media during 2015.

Finally, Christos Katsioulis, Chief of Friedrich-Ebert-Stiftung’s representation in Greece, discussed the findings of the presentations and recognized the negative image of Germany’s role in Greece during the crisis, emphasizing, however, that many times this image is influenced by historically established rules, according to which public speech and the media in Greece work, which may distort the impartial and documented analysis and public discussion about the crisis.