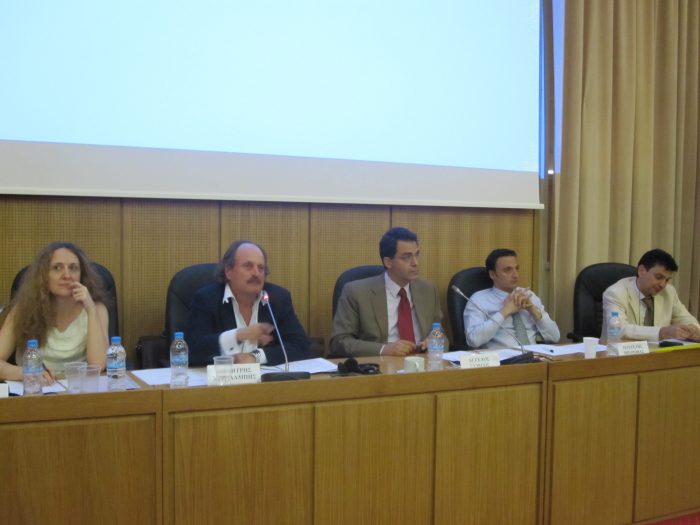 The Hellenic Foundation for European & Foreign Policy (ELIAMEP) & the Association of European Journalists (AEJ) – Greek Section organised a workshop on ‘Media policies & regulation for media freedom & independence’. The workshop took place on 30 June 2011 at the central building of the University of Athens, Greece. It was held under the framework of the MEDIADEM project and served to explore various national regulatory practices in the field of the media and their effects on independent media behaviour.

The first session of the workshop ‘Structural regulation: Current policy debates for media freedom and independence’ started with a presentation of the legal issues surrounding digital terrestrial television in Greece by Evangelia Psychogiopoulou. Evangelia Psychogiopoulou, Research Fellow at ELIAMEP, addressed the complexities and shortcomings of the legal framework, highlighting that the lack of strategic planning, coordination and supervision on behalf of the state has not only created market uncertainties but has also favoured market foreclosure, with serious implications for democratic politics. Pierre-François Docquir, Senior Researcher at Université Libre de Bruxelles, then took the floor to present the rules and funding schemes that aim to guarantee a plurality of media services in Belgium. His analysis centred on the degree to which the effectiveness of those mechanisms is challenged by the development of new media services (as defined under the EU Audiovisual Media Services Directive) and the Internet. Rachael Craufurd Smith, Senior Lecturer at the University of Edinburgh, discussed the development of a media plurality test in the UK that sits alongside the competition rules and, in particular, its application regarding the proposed NewsCorp purchase of remaining shares in the satellite broadcaster BSkyB.

The second session focused on news media content regulation and media freedom and independence. Member of the Icelandic Parliament and Chair for the International Modern Media Institute, Birgitta Jónsdóttir talked about the Icelandic Modern Media Initiative (IMMI), a catch-all freedom of expression law-based project that aims to make Iceland a global safe haven for investigative journalism in the digital era. Birgitta Jónsdóttir explained that the IMMI is based on extensive research on the best legal practices for the promotion of freedom of the press and information from around the world and stressed the significance of whistleblower protection and transparency laws. The presentation of William Horsley, Media Freedom Representative of the Association of European Journalists, dealt with the many-sided implications of Wikileaks on media law and journalists’ ethics, focusing particularly on issues of internet governance and the conflict between privacy/secrecy on the one hand and the need for information on the other. The discussion continued with Susana de la Sierra, Professor at the University of Castilla-La Mancha, who elaborated on recent developments regarding practices of journalists’ self-regulation in the print and audiovisual media in Spain. She noted that the strategies of self-regulation in the field are quite promising, yet there is still ambiguity on their type and scope. The session ended with the presentation of Dilek Kurban, Director of the Democratization Program at Turkish Economic and Social Studies Foundation. Dilek Kurban provided an overview of the evolving media content regulation in Turkey, with a focus on the tension between criminal laws regulating anti-terrorism and freedom of expression. The reforms in the national legal framework for the media, introduced as part of the country’s EU harmonisation process, were also analysed in detail.

The third session explored aspects of public service media freedom and independence. Henrik Søndergaard, Associate Professor at the University of Copenhagen, talked about the unfulfilled privatisation of the public channel TV2 in Denmark. He argued that one of the lessons learnt from the conflicts between the European Commission and the Danish state about the funding of TV2 is that the state for quite a long time failed to realise the importance of adjusting to EU state aid regulation. Alina Mungiu-Pippidi, Professor at Hertie School of Governance, discussed public service broadcasting (PSB) in Eastern Europe, noting that the variation across cases of government behaviour towards PSB can be attributed to the varying degrees of political clientelism. On his part, Sebastian Müller, Researcher at the University of Bielefeld, elaborated on the principle of PSB state independence in Germany. He highlighted that the principle is generally respected, yet noted that there is room for improvement through, for example, the re-evaluation of the composition of the broadcasting councils, so as to include relevant societal groups (such as migrant organisations).

The final session was devoted to the practices of the Greek media regulatory authorities. Alexandros Oikonomou, Lawyer at the National Council for Radio and Television (NCRT), discussed the role and functions of the NCRT, arguing that the state should recognise the need for granting the Council with substantial regulatory autonomy. Pantelis Borovas, Head of the Media Sector Unit of the Hellenic Competition Commission (HCC), presented the role and practice of the HCC regarding the support of pluralism in the media sector, highlighting some of the principal constraints that the HCC faces in this respect. Aggelos Syrigos, Assistant Professor at Panteion University and Vice President for the Sector of Electronic Communications of the National Telecommunications and Post Commission (NTTC), then focused on the role and competences of the NTTC in regulating the media sector, with due emphasis on the transition to digital terrestrial broadcasting.

The speakers’ presentations were commented by Dia Anagnostou, Senior Research Fellow at ELIAMEP, Spyridoula Kalogirou, Head of the Legal Department at the Hellenic Audiovisual Institute, and Dimitris Charalambis, Professor at the National and Kapodistrian University of Athens. In the substantive discussions that followed speakers and participants exchanged views on the challenges that media freedom and independence faces in the increasingly converged media environment as well as due to the concentration trends that have spread rapidly throughout the sector.