Online discussion: “Turkey’s Pivot to Eurasia-Asia as an Alternative to the West” 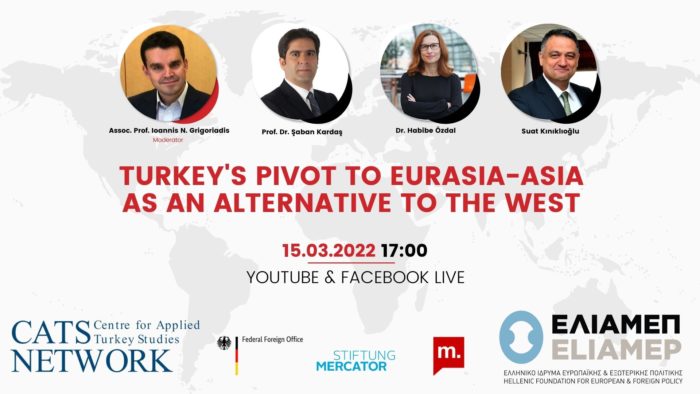 Medyascope and the Turkey Program of the Hellenic Foundation for European and Foreign Policy (ELIAMEP) joining forces and start a joint webinar project. The aim of these webinars is to foster a more informed and sophisticated debate in seven important areas.

Turkey’s pivot to Eurasia has emerged as one of the most controversial questions of Turkish policy debates. Turkey’s position in a “post-Western world” is widely debated, as Asia emerges as the world’s new demographic and economic focal point. The shift of global production patterns as well as domestic political struggles have challenged Turkey’s two-century-long strategy of seeking cultural, economic and political integration with the West starting with Selim III, continuing with Tanzimat and culminating with Atatürk. This is not only reflected in the popularity of anti-Western thinkers like Necip Fazıl Kısakürek, but also in the increased influence of a group of “Eurasianist” retired officers who view Turkey’s future not in NATO but in building strategic partnerships with China and Russia. On the other hand, Turkey’s economic and political links with the West remain too strong to be ignored, and the risks of an abrupt shift remain high. This webinar will explore how realistic this pivot is and how it could affect Turkey’s domestic and foreign policy, as well as global strategic trends.

Moderator:
Dr. Ioannis N. Grigoriadis is an Associate Professor and Jean Monnet Chair of European Studies at the Department of Political Science and Public Administration, Bilkent University and a Research Fellow at the Hellenic Foundation of European and Foreign Policy (ELIAMEP). His research interests include late Ottoman and republican Turkish politics and history with a focus on nationalism and democratization.

Dr. Habibe Özdal is an Assistant Professor in International Relations at Istanbul Okan University. Dr. Ozdal has focused the majority of her research on Russia and the Eastern Europe with particular reference to the Russian domestic and foreign policy, Turkey-Russia relations, and Ukraine politics. Dr. Ozdal has authored and co-authored book chapters, articles and reports on Russian foreign policy, Russia-Ukraine relations and Turkey-Russia relations for various organizations. Dr. Ozdal has also carried out extensive fieldworks across the region including Russia, Ukraine, Georgia, and Kyrgyzstan.

Prof. Dr. Şaban Kardaş is a faculty member at the Department of Political Science and International Relations at TOBB ETU. He has published scholarly articles and book chapters on Turkish domestic and foreign policies, human rights, energy policies and international security and has been an occasional contributor to Turkish and international media.

Mr. Suat Kınıklıoğlu is a former member of the Turkish Parliament. Until recently, he was a CATS fellow with the German Institute for International and Security Affairs SWP (2019-2020). Mr. Kınıklıoğlu was an academic visitor at Oxford University’s St. Antony’s College Middle East Center from 2018 to 2019. In 2014 he became a Senior Fellow at the Center for American Progress in Washington D.C and in 2015 he was resident fellow at the Institute of Politics at the University of Chicago where he delivered lectures on Turkey. Mr. Kınıklıoğlu served in the Turkish Parliament from 2007 to 2011.