Halki 2009 – Current and Emerging Security Challenges in Southeastern Europe, the Black Sea, the Mediterranean and the Middle East – Seminar Report 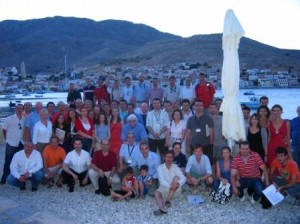 This year’s Halki International Seminars, which celebrate their 20th anniversary, focus on the role of the transatlantic institutions in helping local stakeholders address security challenges in the Middle East, the Black Sea and Southeastern Europe. Read the report of the Halki International Seminars 2009 in PDF. Ιt is a remark of general acceptance that this year’s group is one of the strongest in recent years, as well as one of the most populous comprising of 75 participants. The Seminar is organized by the Hellenic Foundation for European and Foreign Policy (ELIAMEP) in cooperation with the Balkan Trust for Democracy in Belgrade and supported by the German Marshall Fund of the United States (GMFUS) in Washington D.C., the Hellenic Aid of the Greek Ministry of Foreign Affairs, OTE S.A., the General Secretariat for Youth in Athens, the Embassy of the United States in Athens, the French Institute of Athens, the European Fund for the Balkans in Belgrade, the Dodecanese Prefecture in Rhodes and the Region of South Aegean in Syros.