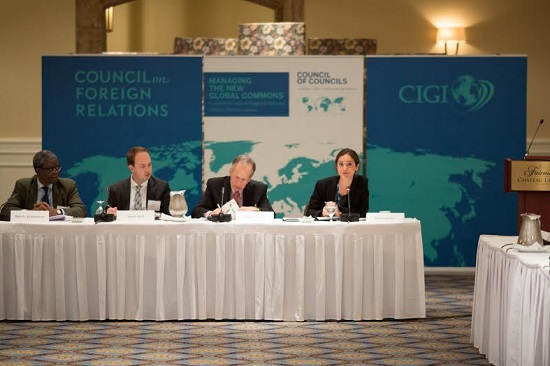 On September 28-30, Elena Lazarou, currently  a Visiting Researcher at ELIAMEP participated in the Sixth Regional Conference of the Council of Councils in Ottawa. The Council of Councils, an initiative of the US based think-tank Council on Foreign Relations, brings together leading foreign policy institutes from around the world to discuss issues of global governance and multilateral cooperation and to introduce remedies into the public debate and policymaking processes of member countries. The membership of the Council of Councils includes leading institutions from twenty-three countries, roughly tracking the composition of the Group of Twenty (G20).

Dr. Lazarou has participated in the Council since 2012, representing the Brazilian Think Tank Getulio Vargas Foundation (FGV). In this year`s meeting she participated in the panel on the future of internet governance, an issue which has held a central role in a number of states and within the UN in the past year, following revelations regarding espionage, cyberattacks and cyberterrorism. Brazil, together with Germany, has voiced strong concerns on the issue, including through the submission of a joint resolution in the United Nations General Assembly on “The Right to Privacy in the Digital Age”.